Where can I work with a Degree in Music Therapy?

Music as therapy goes back thousands of years when ancient philosophers  thought that music could serve a therapeutic purpose. Plato considered music to be “the medicine of the soul.” Music had the “power to penetrate into the very depths of the soul.” Aristotle believed that music had cathartic effects and could provide relief from negative emotions through catharsis. Some cultures, including the Native American tradition, believed music had mystical powers that was used in healing rituals. Today, music as therapy is prevalent in a host of settings to treat conditions such as depression, anxiety, PTSD, chronic pain, and Parkinson’s– plus a slew of other neurological disorders.

Here’s a look at some of the employment opportunities in music therapy:

The Cancer Treatment Centers of America: Use certified music therapists to assist patients as a therapeutic means to: release negative emotions, express feelings, reduce stress and relax the mind. Not only is music utilized during a therapy session, patients are also encouraged to experience the positive effects of music at home.

Autism: Children and teens with Autism Spectrum Disorder (ASD) can improve social behaviors, increase focus and attention, increase communication attempts (vocalizations, verbalization, gestures, and vocabulary), and reduce anxiety through music. However, this is a controversial area with respect to music’s efficacy as a treatment method for ASD. A 2017 Norwegian study concluded that there was no benefit from music therapy.

Addiction/Substance Abuse Rehabilitation: Studies have found that music therapy helps reduce the stress of coping with a period of sobriety or drug withdrawal.

Geriatric Facilities: There is a broad range of applications for the elderly, but dementia and Alzheimer’s is where it is most commonly applied. In numerous clinical studies of older adults with Alzheimer’s and other forms of dementia, familiar and likable music, not medication, has reduced depression. It has also lessened agitation, increased sociability, improved movement, and cognitive ability.

Schools:  Music has proven to help students with special needs behave appropriately, interact with others, relax the muscles and provide a distraction from pain, anxiety and discomfort. It’s also effective dealing with attention deficit  hyperactivity disorder.

Correctional Institutions: Mental health problems are prevalent in U.S. prisons, detention centers, and community-based parole facilities. Music can create a positive and peaceful environment for inmates and parolees. Studies demonstrated that prisoners responded to music therapy positively. The experimenters also concluded that there was a reduction in anxiety only after two weeks of this type of therapy. 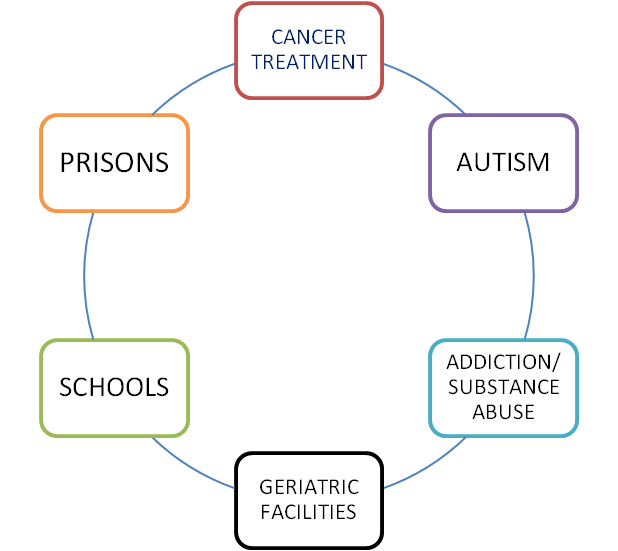 Adult Psychiatric Hospitals/Clinics: Several different music therapies are used in the management of psychiatric disorders. One method is combined music used in combination with other therapeutic procedures,  wherein the patient selects his/her own music.  Another is contemplative music therapy that helps patients appreciate the significance of music and art in general. This therapy also aims to soothe agitation and alleviate sadness.

Private Practice: Considerations are: do you want to specialize with a certain age-group or segment of society? What is the best place geographically to set up shop? You may want to educate yourself in other techniques to enhance your behavioral analysis procedures and treatments. Add to your credentials by becoming certified in Neurologic Music Therapy at one of their training centers.

Pain Management Centers: In acute pain after surgery studies have concluded that music has reduced the amount of opioids and/or morphine needed. Part of the music therapist’s job is to help people find the music that is significant to them. This allows the patient’s music selection to work in a specific, functional way to help cope with acute or chronic pain.

Rehabilitation Facilities: Music-Supported Therapy (MST) has been developed recently in order to improve the use of the affected upper extremity after stroke. A 2011 study published in the journal Brain Injury investigated the neuroplastic mechanisms underlying effectiveness in a patient with chronic stroke. MST uses musical instruments, a midi piano and an electronic drum set emitting piano sounds, to retrain fine and gross movements of the paretic (partial paralysis) upper extremity. Post-therapy, a marked improvement of movement quality, assessed by 3D movement analysis, was observed.

Parkinson’s Treatment: At its core, music is sound, and sound is rooted in vibration. Dr. Lee Bartel, PhD, a music professor at the University of Toronto, along with several researchers are exploring whether sound vibrations absorbed through the body can help ease the symptoms of Parkinson’s disease. This type of music therapy has led to improvements in symptoms, including less rigidity and better walking speed with bigger steps and reduced tremors. 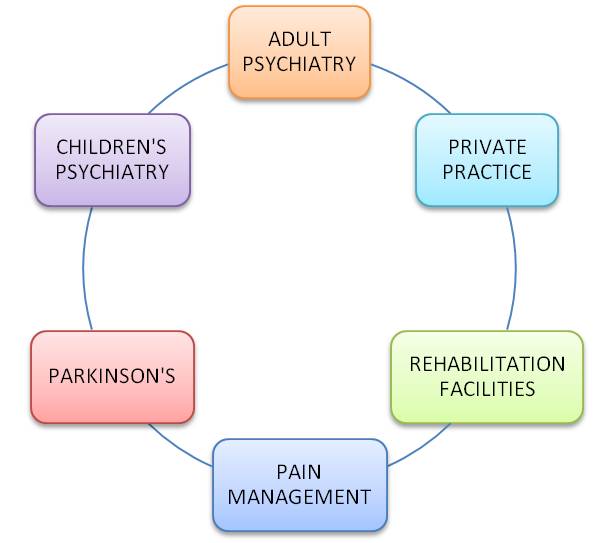