What Can I Do With a Degree in Mathematics? 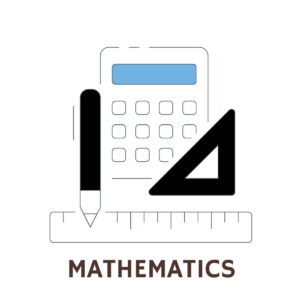 If you’re already into math then you likely already know that mathematics is a language. And much as languages that are spoken, the language of numbers can be applied in my different ways.

Like any other language, you must first learn the basic rules. From kindergarten through the 12th grade, the grammar and syntax of numbers fill math classes. This is where many lose interest in math. But not you. If you’re interested in pursuing a degree in mathematics at the undergraduate or graduate levels, you want to learn how to apply math to solve really interesting problems. 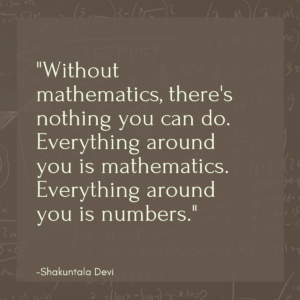 The good news is that the undergraduate years are where you really start to learn how to solve complex, real-world problems with math. From fine-tuning the most complex algorithms to verifying that a statistical approach is correct for a study, mathematics is at the center of many university-based and real-world disciplines. Plus, universities are home to faculty that can help you dive deeper into the theoretical problems in math.

Whatever your choice, for those serious about enhancing their mathematical understanding, higher education is a must.

Here at DegreeQuery we cover all types of degree programs in higher ed. And mathematics is no exception. Read more to find out what exactly you can do with a degree in mathematics!

What is the study of Mathematics? 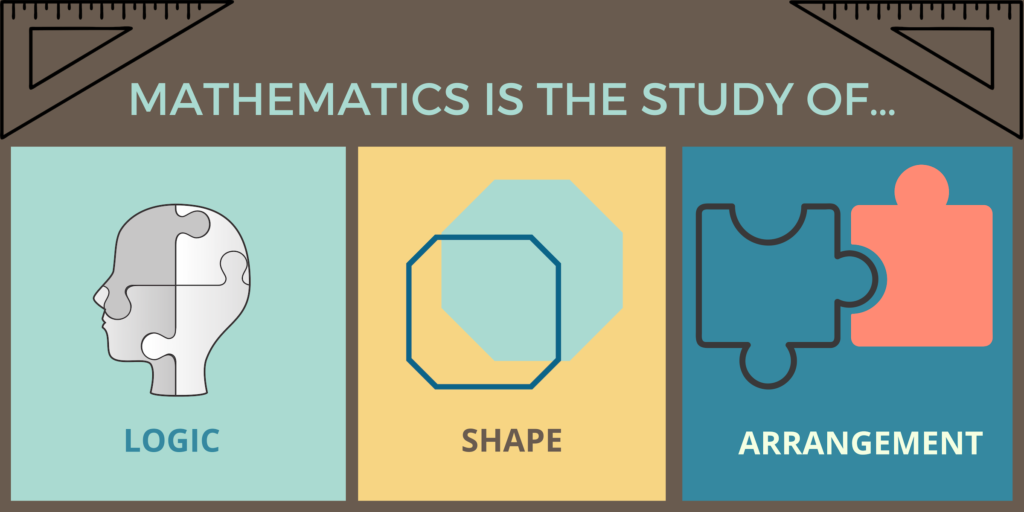 Before we jump into what you can do with a degree in mathematics, let’s examine what the study of mathematics is.

At its most general level, mathematics is the seeking and using of patterns in numbers. Many times these patterns mimic or are helpful in the representation of some phenomena out in the world. When this occurs, new branches of applied mathematics crop up.

At an undergraduate level, courses in mathematics may include the following subjects:

In graduate settings or on-the-job applications, mathematicians and related jobs will often focus primarily on a handful of areas. Below are the major areas one can focus on in the study of and application of mathematics.
Areas of Pure Math

The first step to answering “what you can do” with a mathematics degree is to look at what fields heavily utilize mathematics. After a discussion of these fields, we will look at what degree options can help you to get to your desired role or focus. 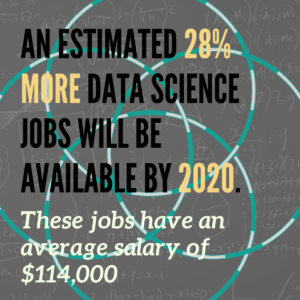 Science, Technology, Engineering, and Math (STEM) disciplines are in high demand across many industries, and while there aren’t a high degree of jobs that are 100% math, job candidates with strong quantitative skills are truly prized.

Some of the most common job roles relying heavily on include the following:

How Much Do Math Majors Make?

Math majors are one of the most sought-after majors in a variety of fields. Additionally, math majors score the highest of any other major on standardized tests for graduate school (see our section on how mathematics prepares you for grad school below). 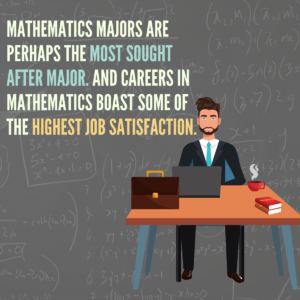 The salary of math majors depends on a number of factors, but what we can look at are the average salaries for common jobs that math majors hold after graduation.

Of the four careers most closely related to mathematics, average salaries are high:
Average Salaries for Math-Related Careers

There are of course many careers that mathematics majors or graduate degree recipients can enter into. Of roles that prize mathematicians with a little additional training, here are common salaries:
Average Salaries in Careers Mathematicians Can Work In

How Mathematics Prepares You For Grad School 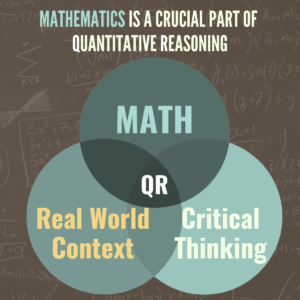 Quantitative thinking — as is taught in mathematics degrees — is prized in a wide variety of fields. It’s also a crucial skill for excelling at standardized tests for graduate schools. Mathematics majors score higher — on average — than any other major on both LSAT and GMAT tests. These are the predominant tests for entry into graduate programs in law school as well as business.

The bulleted list below notes how many points above or below the average GMAT and LSAT scores individual majors perform.

Mathematical techniques can be applied to many disciplines, including those that just need a strong basis in problem-solving in logic. This makes math a great undergraduate major to take into graduate school in another discipline.

Some common graduate programs pursued by mathematics majors include:

For some context on just how well a mathematics degree prepares you for graduate schools of a variety of types, let’s dive into average GMAT scores by major.

Keep in mind there are many parts of a graduate business school application. Standardized tests like the GMAT, however, are generally one of the largest components.

Many top-tier business schools — currently ranked between 60th and 100th in the nation — have average GMAT score of slightly over 600. These averages are the middle of what is generally a 20 points spread in either direction. This means that the GMAT score of mathematics majors is high enough to gain admittance into many top 100 graduate business programs. Furthermore, besides philosophy or economics — the only other two majors to boast scores close to as high on the GMAT — it’s the only major that can boast such high results.

What is the Career Outlook for Those With Math Degrees?

If we haven’t made it clear already, mathematics majors degree holders are in high demand in many disciplines. From high school education to “quants” in high finance, mathematicians provide the “secret sauce” to many organization’s success. There also aren’t many mathematicians. This makes those with math degrees even more desirable. 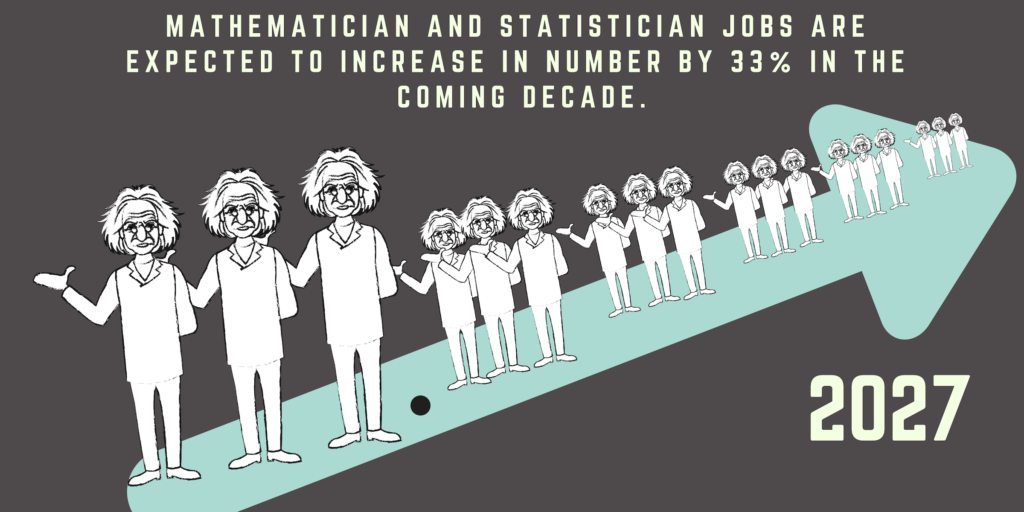 Below we’re going to look at the career outlook for those with math degrees through two lenses: mathematics graduates that work as mathematicians or statisticians, and those that work in more applied fields, or in fields related to mathematics.

The average salary for these roles as of 2016 is $84,760. With the largest employment settings of those with jobs titled mathematician or statistician in the following locations:
Locations of Work for Mathematicians

Locations of Work for Statisticians

Career outlook for Mathematics-Heavy Roles
Perhaps the largest mathematics related role by number of jobs is mathematics instructor. This is followed by a wide range of mathematics-related roles including actuary, data scientist, certain engineering roles, and operations research analysts. The career outlooks of these career types may be seen below:
Growth in Job Postings by 2026

Interested in job interview tips? Check out DegreeQuery’s coverage of how to interview for some of the most common mathematics jobs below: 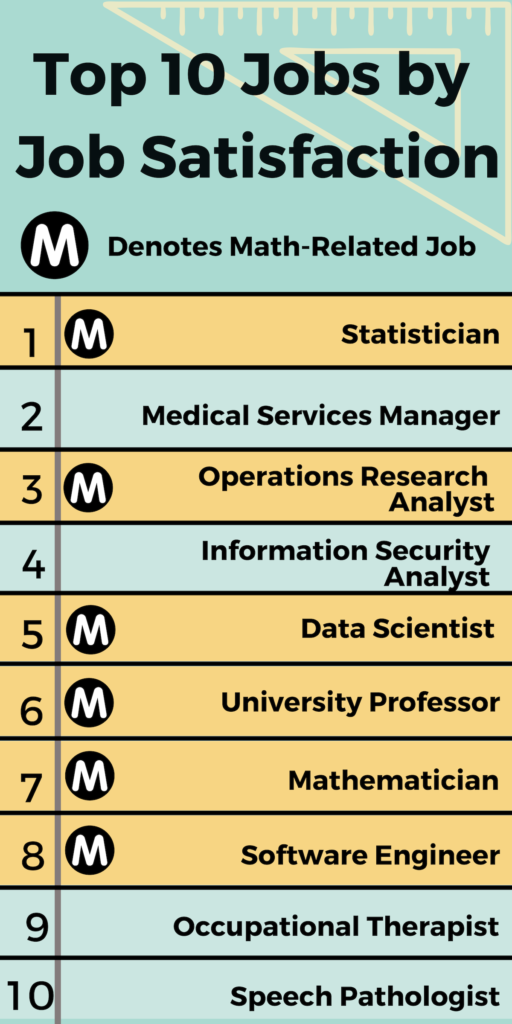 With 6 of the top 10 jobs rated for highest job satisfaction, it’s hard to go wrong with a mathematics degree!

Mathematics and related degrees are available at the associate’s through doctoral levels. You choice of what degree level to pursue will help to dictate what jobs you may qualify for, and rely on your current education level, the cost of schooling, and the time you can set aside to pursue further education. Below we’ll work through descriptions of common degree programs in mathematics.

Associate’s degrees in mathematics are typically transfer programs in which students transfer to a four-year program in accounting, mathematics, actuarial science, or engineering once they have completed their associate’s.

As with associate’s degrees in other disciplines, an associate’s in mathematics typically requires 60 credit hours of study which often requires 1.5-2 years of study. Students first endeavor upon general education requirements. General education requirements help to ensure that graduates are well-rounded and analytical thinkers. Courses needed for this portion of your study may include courses in the humanities, social sciences, the arts, hard sciences, and writing.

Along with completing general education courses, mathematics majors in associate’s programs will often complete courses in the following:

As you can see, mathematics at the associate’s level typically just gets you started on your higher education mathematics path. Bachelor’s degrees in mathematics, statistics, actuarial science, accounting, or engineering pursue mathematics in much greater detail. 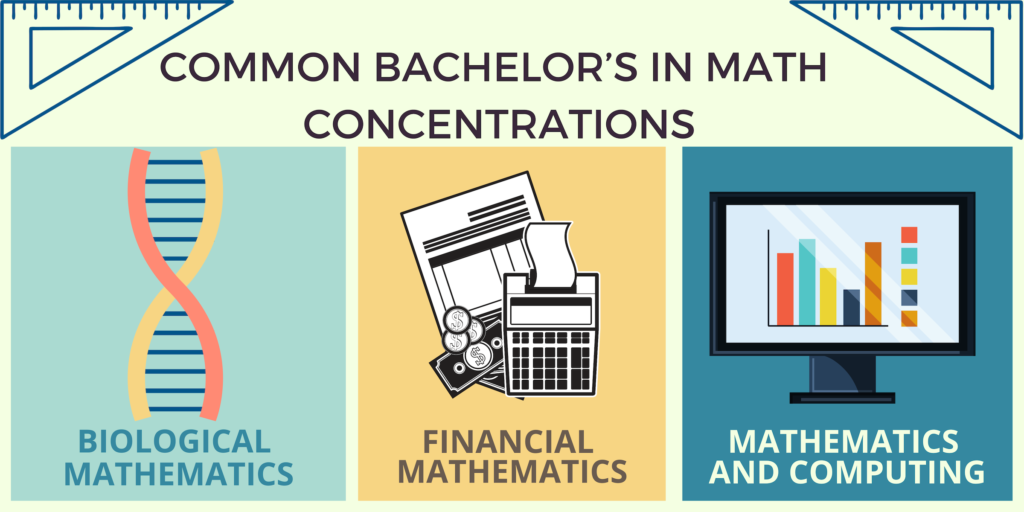 A bachelor’s in math or related disciplines is the standard degree for entry-level positions in engineering, accounting, actuarial science, statistics, or math. Bachelor’s degrees typically require around 120 semester credit hours to complete. These degrees typically require 4 years to complete, though completing a bachelor’s in 3-6 years is common without a prior associate’s degree.

Curriculum for Bachelor’s in Mathematics Degree

Curriculum for Bachelor’s in Actuarial Science Degree
Actuarial science helps to prepare future actuaries. An actuary compiles and analyses statistics to help to assess risk. Actuaries commonly work for insurance companies, in financial settings, and for the government. (Learn more about what degree you need to be an actuary.)

As we noted above in our career section, actuaries hold some of the highest job satisfaction rates of any career. And the most common degree for starting an actuarial career is a bachelor’s in actuarial science. A common curriculum for an actuarial science major may be seen below.

Degrees related to mathematics
A handful of other degrees involve a great deal of mathematics, and are often coupled as minors or double majors with a mathematics degree due to the overlap and valuable skills learned. Related degrees include:

If you’re wondering just how much math is present in some of the above degrees, make sure to check out our FAQs on the relationship between math and related subject:

For those looking to truly stand out in their field, master’s degrees in mathematics, statistics, and actuarial science are truly in high demand.

Master’s degrees in mathematics allow students to specialize more in one area of applied mathematics. For students looking to pursue research in pure mathematics, a doctoral degree is generally pursued after a bachelor’s degree. Students of doctoral programs are awarded a master’s degree part way through their course of study.

Master’s degrees generally require 1.5-2 years of study, and require between 30 and 54 credit hours for completion. Additionally, students at the master’s level are commonly required to create a capstone project or complete a master’s level thesis. A thesis is generally a hundred+ page survey of current literature within the field in which you are studying. Unlike a dissertation — which is original research — a master’s thesis shows that you are up-to-date on current research in your field and that you can think critically about issues in your field.

Common curricula for master’s-level math-related degrees are noted below. Though students may generally tailor their course of study more than at undergraduate levels.

Master’s in Mathematics Courses
Some selection of the following courses is common:

Master’s in Statistics Courses
Some selection of the following is common:

Master’s in Actuarial Science Courses
Some selection of the following is common:

Master’s in Mathematics Education
One common route for bachelor’s in education holders to take is to pursue a teaching position in mathematics for primary or secondary school. Many master’s in mathematics programs help to lead to licensure in these subjects for the purposes of teaching in public schools. Below are some of the most common courses in this degree type:

Doctorate of Philosophy (Ph.D.’s) in mathematics are the pinnacle of both applied and pure mathematics training. Ph.D.’s are research doctorates, meaning central goals of these programs are to prepare students to advance research in their field. As part of this goal, Ph.D. candidates in mathematics must submit a dissertation — or several-hundred-page publication of original research — to obtain a doctoral degree.

Doctoral programs in mathematics typically take 4-6 years to complete. Typical coursework includes the following, though a large portion of the program will also revolve around your original research: