What Degree Does a Marine Engineer Need? 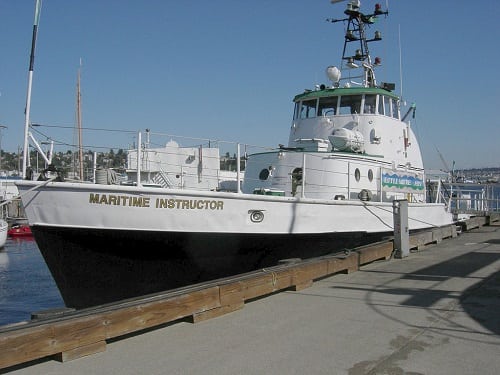 Does studying at a maritime academy require you to join the military? That depends on where you get your education. Graduates of the United States Merchant Marine Academy in Kings Point, NY, which is the only marine academy run by the federal government, have a service obligation. For six years, they must maintain their license as an officer in the merchant marine of the United States. For five years, graduates must serve in an approved maritime occupation, such as merchant marine officer or commissioned officer on active duty in one of the armed forces. The student must also apply to be appointed a commissioned officer in the U.S. Coast Guard Reserve or U.S. Navy Reserve for a minimum of eight years. However, students who are accepted as midshipmen at the U.S. Merchant Marine Academy pay nothing for their tuition, room, board, textbooks or uniforms. The federal government pays these costs, and the service obligation that students sign a contract to complete is the government’s return on this investment.

At other institutions, no such service requirement exists. For example, students of the State University of New York (SUNY) Maritime College, a maritime academy run by a state government, are called cadets. They are not part of the military, although many cadets choose to pursue their U.S. Coast Guard license. What you can expect is to be part of a regiment of uniformed cadets who are learning a disciplined lifestyle along with the knowledge they need to become a maritime engineer. It’s important to consider what your goals for life after college are and what you are willing to invest – financially and otherwise – in your education, and to explore what studying marine engineering at different maritime academies will been for you.

The Accreditation Board for Engineering and Technology (ABET) is the organization that sets the criteria for a marine engineering program to become accredited, determining at least the basic  course requirements you will need to complete in order to graduate. An ABET-accredited curriculum includes studies of structural mechanics, fluid mechanics, materials properties, dynamics, hydrostatics, energy and propulsion systems, instrumentation and probability and statistics.

Students often start of their education with a course or sequence of courses in introduction to marine engineering. Basic science courses in physics and chemistry as well as math classes such as calculus, differential equations provide the foundation of science and math knowledge engineers need. Studies in nautical science, naval science and the history of sea power are all valuable subjects of study.

What degree do I need to become a Naval Architect?

What Is the Job Outlook Like With an Engineering Degree?