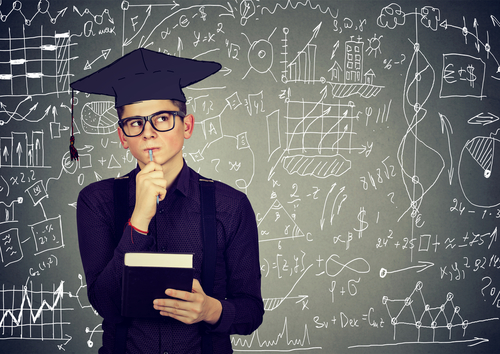 To a large extent, the material world wouldn’t exist without mathematics. Great feats of engineering, large-scale accounting jobs and supercomputers are just some of the industries and events that have relied on mathematics, and while supercomputers haven’t always existed, it’s impossible to think of the modern world without them.

In many respects, getting an undergraduate degree in math is similar to getting an undergraduate degree in a language. People who graduate with either of these majors can use the skills they’ve learned to work specifically in the field or they can use the skills to augment another career. For example, a person who studies German at the undergraduate level may go on to study law at the graduate level. This could lead to a career in international law.

A mathematics degree prepares people for careers in marketing, engineering, computer systems analysis, financial analysis, animation, accounting, law and medicine. Some of these jobs, like animation, law, medicine and marketing, may require some additional coursework outside of math and computer science to prepare the person for the position. However, and even more importantly, the list in the previous sentence shows just how flexible a degree in mathematics is. The people who study math prepare themselves for several careers, including computer science.

Incidentally, those who study computer science, math and languages often get jobs in computational linguistics, a course of study which allows computer programmers to create language-based computer systems, like Google Translate.

According to Forbes, anyone who has done any kind of research into computer science graduate programs probably knows that many of these departments combine both math and computer science in one academic department. Degree seekers in this program often go into jobs, like encryption, parallel supercomputing, computational science, banking and finance and higher education.

It’s also equally important to realize that discrete mathematics is a foundational aspect of computer science. Algebra and number theory count as just two mathematical concepts that computer scientists use in their day-to-day lives. The study of math also allows computer scientists to understand algorithms. This concept has modern-day applications in eCommerce websites, like Amazon, eBay and other online shopping outlets.

Additionally, some fields of computer science rely more heavily on mathematics. Careers in artificial intelligence, machine learning and computational linguistics all require training in computers and mathematics. Specifically, these fields of study require training in linear algebra, probability theory, calculus and discrete math. Finally, the first computers, calculators, were created to assist with math. From the simple hand-held calculator to the amazing supercomputers, math and computers have always gone hand in hand.

Without a doubt, some of the most sought-after and highest-paying careers are in computer science, and many of these jobs require a master’s degree.

Below is a partial list of the jobs that computer scientists are getting today and their annual salaries, according to PayScale.com.

While not all computer science jobs require a graduate degree, many do. The reason being is that many jobs in the IT industry require a depth of knowledge that a bachelor’s degree doesn’t provide. Bachelor degrees give their holders a broad base of knowledge. A master’s degree allows students to delve more deeply into a specific aspect of a subject, in this case, computer science.

Additionally, those who want to be computer science professors typically have to hold Ph.D.’s in Computer Science according to Salary.com. These jobs pay almost $160,000 a year or more. To get a job like this, a person must count on spending at least 10 or 12 years in college before getting hired.

Is it Better to Look at Bigger Companies For Work or Does Nearly Every Company Employ an IT Team?

Do You Have to Be a Programmer to Be an IT Manager?