Do You Have to Be a Programmer to Be an IT Manager? 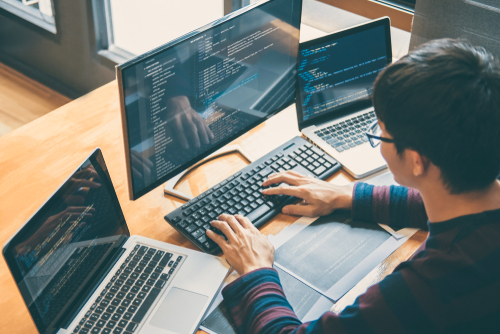 Computer programming is one of the many responsibilities of an information technology (IT) manager which makes many aspiring IT managers wonder if they have to be programmers if their career goal is to be an IT manager. IT managers are generally in charge of managing a company’s projects and computer-based operations. Because they’re in charge of all projects within the company’s computer system, IT managers should have a fairly good understanding of and proficiency at programming. Learn how IT managers and programmers work together and how their duties often overlap.

What is an IT Manager?

Computer and information systems managers, also called IT managers, are the professionals who plan, coordinate and oversee an organization’s computer-based projects and activities. They analyze the company to decide what the organization’s long- and short-term IT goals may be and create a computer system to satisfy those goals. If they determine the system needs upgrades, they make recommendations to management and top executives. IT managers also install and maintain the computer system’s software and hardware while also ensuring the system is secure from outside threats and cyber vulnerabilities.

What is a Programmer?

A computer programmer is a professional who writes and tests codes and programs that make software programs and computer applications do the tasks required of them. Software engineers and developers may do the actual creation of the programs, but the programmers are the ones who turn the programs and apps into something usable. Their other duties include testing apps for errors, bugs and malfunctions; testing codes; expanding and upgrading current programs; and researching ways to simplify the writing process.

Programmers often work alongside software developers and IT managers since IT managers oversee all programs on the system. They often have the knowledge, skill and experience to do work that is typically performed by software developers. Programmers have to have a solid background in programming and must be proficient in several programming languages, such as Java, JavaScript, C++ and Python, among others.

Are IT Managers Required to Be Programmers?

Because of the scope of their work, IT managers should have a good knowledge of programming. Without that knowledge, the IT manager would not be able to oversee the programmer’s work and ensure that it’s as error-free and efficient as possible. IT managers also oversee the company’s computer system and determine what updates and programs need to be installed.

They may also set up and install an organization’s intranet and internet sites. Without knowledge of programming, they would not be successful in this part of their job. Many IT managers have a bachelor’s degree in computer science, and others may even have a degree in computer programming.

Career Outlook for Each Position

Despite the main goal of a programmer is to write and code programs, IT managers may also complete some of a programmer’s duties. While an IT manager may not be required to be a programmer, having programming skills can be very beneficial and can also lead to higher positions within an organization.