What is the Job Outlook for Game Designers? 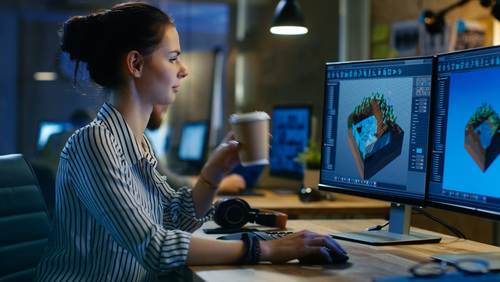 A person who wants to design video games, app games or traditional board games may want to know, “What is the job outlook for game designers?” It is important to note that the Bureau of Labor Statistics (BLS) collects employment statistics for all occupations in the United States of America, and they categorize game designing into two different occupational areas. Those occupational areas include multimedia artists and animators and software developers.

Although the BLS does not track the employment of game designers as a single occupation or occupational category, it does track how many people are employed in multimedia art, animation and software development. The people who create board and card games and video games are likely to be categorized in the multimedia artists and animators category, and about 71,600 people are employed in this occupational category.

People who design gaming apps or computer games are typically categorized in the software development occupation by the BLS. As of May 2018, there were about 1,365,500 employed in this occupational category. Of those people, about 944,200 design applications and about 421,300 develop systems software. However, not all of those people design games. Many of them may design non-gaming software or applications, but the BLS does not differentiate within the occupational category.

How Many Game Designers Work in Each Industry of Employment

Types of Game Design Jobs With the Highest Demand

A person who can design games for smartphones will have the best job outlook between now and 2028. A majority of American adults own smartphones, and they spend an increasing amount of time on their phones playing games. This trend is expected to continue. A person with the skills for coding as well as game design should expect to have the most job opportunities, high salary offers excellent benefits packages and the ability to work in a wide range of locations and environments.

Places With the Most Jobs for Game Designers

Other Factors in the Job Outlook for Game Designers

The phenomenal rate of growth for game designers in the applications industry is due to the high demand for new, entertaining apps for smartphones and tablets. More people are converting from flip phones and desktop computers to smartphones and tablets, so more apps will need to be developed in order to satisfy consumer desires for fun and leisure activities. Children are increasingly becoming owners of smartphones, and they also enjoy playing games on their mobile devices. Many of the multimedia art jobs are being outsourced to countries with lower labor costs, which could be a factor in the average rate of growth for game designers within that industry. However, many companies also outsource their coding and testing to workers in other countries. An economic downturn or a rapid change in technology could also affect the job outlook for game designers across all industries. If people do not have disposable income to purchase new phones or new apps, then the demand will be lower.

Knowing about the job outlook for game designers could make a difference in a person’s choice of major or their job search after college. Most people want to enter into a career where there will be plenty of job openings and enough of a demand for advancement opportunities and competitive salaries. Understanding what the job outlook for game designers is facilitates a person’s personal and professional goal-setting and financial plans.