Both occupations have an unusually large wage difference of more than $100,000 between the 10 percent of workers earning the most money and the 10 percent who earn the least, the BLS reported. 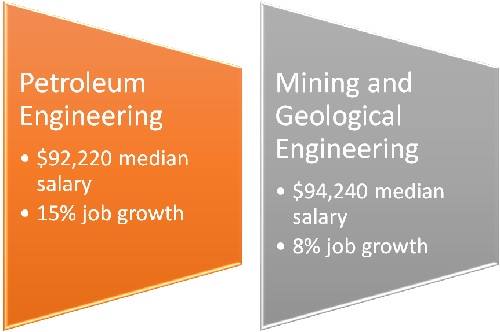 The job outlook for mining and geological engineers is also positive. With an eight percent growth rate anticipated, the field is growing at the roughly the same rate as all engineering jobs and as overall job growth for all occupations. However, mining and geological engineer is already a very small occupation, with just 7,300 existing workers. The job growth expected will only add another 600 new jobs.

In addition to growing, jobs in mining and geological engineering are also changing. Employers that once hired engineers in-house are increasingly choosing to hire engineering firms for contract work instead, according to the BLS.

Some engineering occupations offer widespread job opportunities. Others require you to do a lot of fieldwork in specific locations. Mining and geological engineers may have to move to a region near mines, perhaps in far-flung locations, to get a job in their field, and they should expect to visit the worksite fairly frequently. Then there are some engineering occupations that require frequent travel even after relocating. Petroleum engineers may take numerous visits offshore oil rigs. Those who work for global oil and gas companies may find themselves working overseas on a long-term basis.

If you’re eager to travel the world and experience new climates and cultures, these travel requirements make petroleum engineering an excellent career path to consider.  While homebodies might not see this aspect of petroleum engineering as an advantage, aspiring globetrotters will certainly count this factor as a benefit.

What are the Highest Paying Jobs with a Degree in Petroleum Engineering?

What Are the Highest Paying Jobs with a Degree in Mining and Geological Engineering?

What Are the Benefits of Pursuing a Degree in Petroleum Engineering?