Are There Any Science Classes Required for a Degree in Math?

While students in other majors are worrying whether they will have to take math classes, math majors may wonder what other courses they must take to earn their degrees. If you enjoy working with numbers and mathematical concepts but are less enthusiastic about dissecting specimens and mixing chemical compounds, you might be hopeful that you can avoid taking science courses as part of your college curricula. That isn’t the case, but many math majors find that their college-level science studies are valuable to their academic and professional interests. In addition to their studies in the mathematical sciences, students majoring in math also have to complete their college’s general education requirements and may be required or encouraged to take classes in physics and computer science, as well. 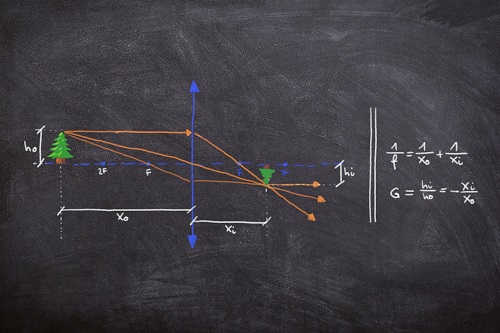 Throughout elementary and secondary school, science and math are split into different disciplines. However, when you reach college, you may encounter the term “mathematical sciences” and even learn that math itself is regarded as a science – the science of quantitative relationships. The mathematical sciences include both pure or theoretical and applied mathematics as well as statistics. You might find math-related subjects, like actuarial science, to be also included in your college’s department of mathematics.

Though the mathematical sciences are important, especially if you are thinking of majoring in math, they typically do not count as a laboratory science.

Students usually have to complete at least one laboratory science, and sometimes two or even three science courses, as part of their required general education coursework. There are good reasons why every college student should take science classes, according to Forbes, including developing a big-picture understanding of scientific methods and concepts.

You don’t have to be a science enthusiast to find a laboratory science course that you can do well in academically and find interesting. Many biology, physics and chemistry courses at colleges are intended for non-science majors.

Besides taking classes to check off your general education requirements, you may need to complete studies in the physical sciences in order to attain your degree. Physics is one of several math-related fields that mathematics majors may find valuable later on in their studies or their future careers. Physics is a branch of science where you will find a great deal of mathematical theory, equations, calculations and methods. Concepts of calculus, one of the high-level mathematical sciences that makes up a large chunk of a math students’ curriculum, are often applied in the study of physics. Math majors may take classes such as modern physics, mathematical physics and statistical physics. In fact, some math majors go on to study physics in graduate school.

Because of the considerable overlap between the applications of math and physics, some colleges offer a specialized undergraduate degree program in mathematics and physics.

Another form of science that is closely related to math is computer science. Mathematicians often use computer software to compile data in databases and analyze the information. As a result, classes in computer science and especially computer programming are valuable for math majors, the United States Bureau of Labor Statistics (BLS) reported. Undergraduate math degree programs might include required courses such as Theory of Computation, Computer Science and Programming or Computers in Problem Solving. Some math degree programs suggest or mandate that students complete a sequence of courses in a career-related subject of study, with computer science as one of the most highly encouraged options.

The BLS reported that developing strong computation and computer programming skills throughout their college education can help math majors make themselves more marketable in their future job search. Employers value computer programming knowledge, especially in candidates for mathematician roles, so acquiring a thorough background in these skills can help improve your job prospects.

What Classes Will I Have to Take for a Degree in Math?

Are There Any Computer Classes Required for a Degree in Math?

Are There Any Business Classes Required for a Degree in Math?