Do Graphic Designers Work on Movies or Only on Still Pictures? 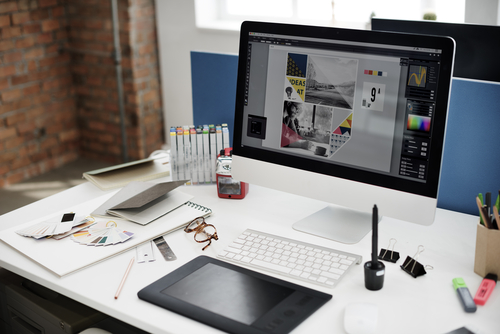 What Graphic Designers Do

Graphic designers do work on still pictures and movies, but they also do many other tasks as part of their job, depending on the company in which they work. They design visual concepts to portray certain ideas and thoughts. They may draw some of their designs by hand or may use computer software programs. Their visual concepts may include fonts, numbers, images, graphics, logos and illustrations.

Many people don’t realize that when they see large billboards alongside the highways, graphic designers created the designs on the billboards. Their knowledge and proficiency with layout software, photo editing software and digital illustration make graphic designers highly in demand because advertising, branding and marketing are so important for the success of a business.

Graphic designs can be found in all areas of our lives, whether we’re watching our favorite program at home, participating in a marathon or reading the newspaper. Here are some basic types of graphic design:

In many movies, most of the logos or illustrations we see throughout a movie are the work of graphic designers. While watching a rerun of Little House on the Prairie, we see baking goods in old-time cans. Graphic designers are the ones who create the can labels to portray that they are from a certain time. Even with action-packed movies, graphic designers have created the images that go into the action parts of the movie.

The career outlook for graphic designers in terms of job growth varies by the industry and the job according to the U.S. Bureau of Labor Statistics (BLS). Graphic designers overall should see a three percent growth in jobs between 2018 and 2028. Those working in computer systems design, however, should see a growth of up to 24 percent during the same decade.

Graphic designers working for publishers that sell hard-copy newspapers, books and brochures could see a decline of 22 percent because of the increasing use of digital media. Overall, graphic designers are still projected to experience good job growth. As of May 2018, graphic designers earned an average annual wage of $54,680, but wages can also go as low as $29,610 or as high as $85,760.

Graphic designers are such a diverse and talented group of professionals; they can usually find jobs in various industries. Those who choose to work in movies and television shows have the opportunities to put their talents and education to use providing exciting entertainment for the world while earning a good wage.

What is a Character Rigger?

What Programs Should I Learn To Become a Character Rigger?

How Do You Become a Character Rigger?

What Kind of Company Does a Character Rigger Work For?

What Kind of Degree Should I Get to Become a Character Rigger?

What is the Median Salary for a Character Rigger?