What Are the Bad Parts of Being a Corrections Officer?

Working as a corrections officer is a crucial job role in society. In this position, you protect public safety and help rehabilitate incarcerated individuals to live a better, law-abiding life on the outside upon completing their jail sentences. You can often get started in this role without taking on the burden of pursuing a college degree – and all the time and expense that comes with it. However, there are some negatives to life as a corrections officer, too. A lifetime of working shift work and odd hours, a great potential for injuries to occur in the workplace, a grueling academy training program and somewhat bleak job growth and wage prospects are among the reasons why a corrections officer position isn’t the best career choice for every worker. 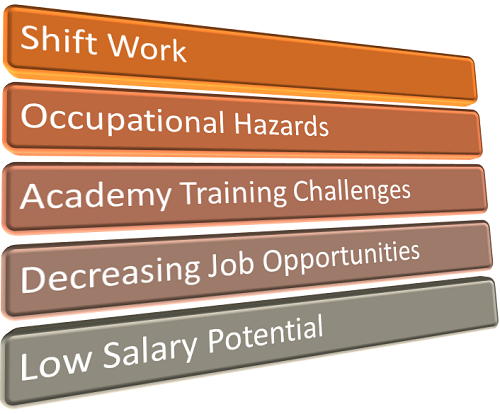 In many professions, having weekends, evenings and holidays off is common. For corrections officers, that’s not the case. Like hospitals and police departments, prisons must be staffed round-the-clock, even on holidays. If you prefer a steady schedule or a nine-to-five shift, corrections officer may not be a choice for you. You are likely to work late-night, overnight and early-morning shifts at least some of the time. Taking time off during holidays may be difficult, if not impossible, especially early on in your career, when you have little seniority. Overtime is common and may even be mandatory, especially if the prison would be short-staffed otherwise.

Besides interfering with your social and family life, shift work can affect your health. Researchers have found links between long-term shift work and sleep problems, mental health disorders, chronic medical conditions and even cancer.

Occupational Hazards of Work in a Corrections Facility

What’s the worst that can happen inside a prison that houses individuals convicted of the most heinous violent crimes? Prison riots, fights and assaults could leave correctional officers gravely injured or cause them to lose their lives. In less drastic circumstances, breaking up fights between inmates or restraining a struggling inmate could leave you with an injury that could require months of medical treatment and keep you out of work, temporarily or permanently.

Corrections officer is one of the occupations with the highest rates of injuries on the job, according to the United States Bureau of Labor Statistics (BLS). In 2018, 360 nonfatal injuries and 11 fatal injuries among corrections officers and bailiffs were reported to the Injuries, Illnesses and Fatalities program of the BLS. Even if you don’t sustain a physical injury, this job can be physically and psychologically stressful. Nearly 20 percent of corrections officers even develop post-traumatic stress disorder, particularly in the wake of inmates threatening or harming themselves or others, including the officer, The Houston Chronicle reported.

Despite the dangers of working in close proximity with individuals who have a history of violence – and being the one standing between those individuals and freedom – most prisons enact procedures that help reduce the likelihood of harm to corrections officers.

The Challenges of Academy Training

Before you can start your career in corrections, you must undergo extensive academy training. Most Peace Officer Standards and Training (POST) programs stretch on for months. You may be sent hours from home if you work for a state-operated prison, or even out-of-state if hired for a corrections officer role in a federal prison. Although the academy often provides housing during training, being away from family, friends, pets and home for so long can be difficult.

Then there’s the corrections officer training itself. In addition to learning the procedures, policies and security measures in place at the prison where you work, there is physically grueling work required in developing skills in self-defense and firearms usage. Learning how to intervene in a crisis situation can be emotionally challenging and, for many people, anxiety-inducing as you think about how to handle some of the most disastrous situations that could arise in a correctional facility.

Although academy training can be physically, mentally and emotionally demanding, it may allow you to get started in the career with little or no postsecondary education. Nearly 9 out of 10 correctional officers report a high school diploma as their highest level of education.

Some careers are so lucrative that the six-figure salary makes all the stress worthwhile. Corrections officers aren’t so financially well-off. The median salary for this occupation is just $44,330 per year, the BLS reported. Corrections officers working for the federal government are the highest-paid, with a median wage of $58,010, but they represent just a small fraction of the occupation and often require a bachelor’s degree. The job outlook, too, is less than heartening, with the BLS predicting a 7 percent decrease in opportunities over the same time period when it anticipates a 5 percent growth rate for all occupations.

Although a 7 percent decrease in jobs is remarkable, the field of protective service occupations as a whole is likely to see slower than average job growth compared to other occupational groups, according to the BLS.

Is It Dangerous to Be a Corrections Officer?

What Are the Daily Duties of a Corrections Officer?

What Is a Typical Salary for a Corrections Officer?

What Is the Career Outlook for Corrections Officers?