What is the Hardest Thing about Being a Computer Programmer? 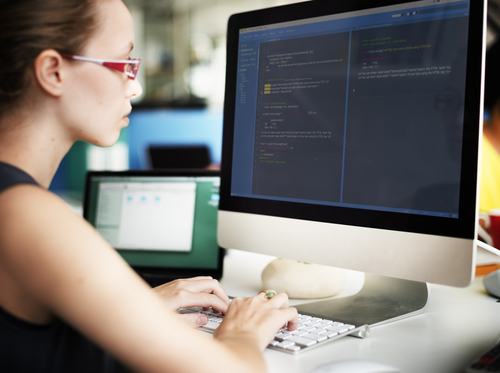 Essentially, computer programmers are problem-solvers. When you dissect the essential job function of a programmer, the overarching theme is taking a complex program and creating a series of simplified steps to solve the problem. Crafting a solution for problems may seem like a straightforward task, but in reality, cracking the code of successful problem-solving is easier said than done. As a computer programmer, you solve problems by doing one thing: creating specific instructions.

Regardless of the problems they must solve programmers must understand how the program interacts with users. This means before that before any code is written, a programmer must analyze and categorize all potential variables. In essence, a computer programmer must understand how to represent and transform problems. By encapsulating problem variables and instructing the computer how to handle each action. This brings us to the next challenge faced by computer programmers.

Human brains baffle computer scientists as our minds have the ability to take extremely complex problems and create a solution by recalling specific elements. Basically, we solve problems by only remembering the most important items needed to create a solution. The same is true for computer programming. As mentioned earlier, encapsulation is the idea of grouping multiple variables together into a single variable. In the realm of programming, this is done by grouping related problems together into a single object, which simplifies even the most complex scenarios.

Instead of writing codes that tackle each individual problem, the encapsulated items are grouped together into a single object. Programmers can then create actions to manipulate the object rather than solve each individual problem. Many programmers regard this as one of the most challenging aspects of their job. As programs become more advanced the need for robust simplification becomes even greater.

Even the most talented computer programmer understands the importance of thorough testing. As you create code, unit tests are invaluable tools used to ensure each element functions as intended. While coding languages have advanced over the past few years they aren’t impervious to errors. In some cases, a missing symbol or improperly aligned segment can result in catastrophic errors. Unit testing safeguards code from bugs, errors and potential security weaknesses.

In the computer programming community, the topic of unit testing is complicated. While some feel this is an invaluable tool, others strongly believe unit testing slows the process and is an unnecessary step. Regardless of opinion, this systematic approach to code development is a proven strategy for success. In fact, the research outlined by Pennsylvania State University found unit testing resulted in a 267 percent decrease in code errors. Of course, this doesn’t mean it’s an easy process.

The most notable challenge with unit testing is choosing what to test and actually writing the code. Crafting test code may be relatively easy, but the additional time and effort required to execute a quality test prolongs code development. So it seems the challenge in this element is more about time involvement rather than skill difficulty.

Oftentimes, legacy code is untested. This means programmers are handed a giant document filled with sloppy and error-riddled code. In some cases, the code may be filled with experimental features that never made it past initial development or erroneous lines of code that seemingly have no purpose.

Working with legacy codes is akin to editing a story written by dozens of disconnected authors.

The biggest issue programmers face with legacy code is meeting client expectations. Unless the client understands the many elements involved in crafting efficient and stable code, they likely won’t understand why it’s taking so long to fix a problem. As a programmer, you must work fast to declutter the code while communicating your challenges in a language your client understands.

Although the challenge of refining and correcting legacy code is becoming easier with the help of advanced software solutions, the programmer still faces an uphill battle. Along with understanding the original code language, programmers must identify specific elements in the code that aren’t working, aren’t optimized for next-gen programs, and determine how to reconstruct code to meet performance and stability demands.

The hardest thing about being a computer programmer may not be a specific technical skill, but rather a personality trait. Digital platforms and frameworks are evolving faster than ever before. The only way to safeguard yourself from failure isn’t something you learn in a book, but rather it’s something you cultivate from within yourself. Adaptability is the secret weapon for computer programmers at any stage of their career. If you dedicate yourself to the art of adaptation you’ll soon find yourself ready and capable of tackling every challenge thrown your way.

What Skills Do I Need to Become a Computer Systems Analyst?

What Major Do You Need to Take to be a Computer Systems Analyst?

What is the Average Starting Salary in the Field of Cybersecurity?