What is the Easiest Computer Language to Learn that Will Help Me Get a Job? 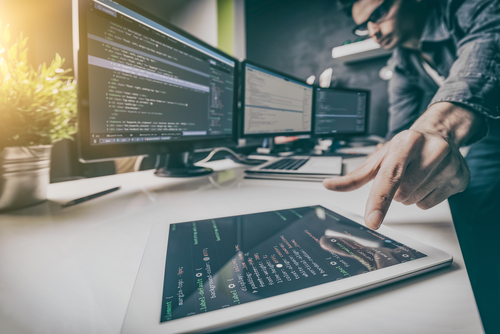 The results on this list come from doing a comparison of two lists. One of the lists tells IT professionals which languages they can acquire easily. The other one tells them which computer languages employers around the world need to most. The lists are derived from articles on the Western Governors University and Tech Republic websites, respectively.

For quick reference, the languages that fit both lists are Python, JavaScript and Java. That is, these languages are easy to learn and in demand.

Future programmers who want to work in computer gaming should learn JavaScript, and while game development may be one of its more popular uses, that’s certainly not its only use. JavaScript makes components like 2D and 3D graphics possible. JavaScript also allows programmers to create interactive maps and menus. It also powers video players. Anyone who creates web-based apps needs to learn this language.

Programmers use Python when they want to develop websites, desktop applications and other web apps. Python’s syntax is simple to learn, which in turn makes reading the code a bit easier. Typical Python functions include commands to display images, to process text, to save important data and to help to solve equations.

Without Java, computer programmers would have to write in numeric code. However, thanks to Java, they can write in English. It’s easy for human beings to learn. Of equal importance, this code’s syntax eventually gets translated into numeric code, the language of computers, making it easy for computers to read. Many programmers who also write open source programs use this program.

An Argument for HTML

While HTML may not land on the most in-demand computer languages, a couple of arguments exist to support learning it. First, it’s the language that computer programmers use to create websites. If even a small possibility exists that an IT professional will need to learn that language, then they should learn it.

Most university computer science departments will tell would-be programmers that they should learn more than one computer language. Few would dispute this. However, in terms of the job market, it’s important to start with the computer language that is most likely to land a job hunter a job. That language is JavaScript, according to Free Code Camp.

Large companies like PayPal and Netflix built their platforms on this language. It’s true enough that Java gets mentioned more often than JavaScript in job postings. However, for every job that requires the Java language, there is on average, nearly three people competing for that one job. On the other hand, for every JavaScript posting, 0.6 are people applying for that job. The supply of programmers who know JavaScript is exceeded by the demand for them.

Finally, learning JavaScript first gives future IT professionals an excellent shot at getting a job. It also gives them excellent long-term job prospects, a consideration that’s not as often spoken about. Learning computer languages can help future IT professionals land jobs in the industry. Fortunately, several languages are both easy to learn and that are in high demand. Among them are HTML, Java, JavaScript and Python.

Future programmers need to learn languages that will also be useful. While many computer languages are useful, JavaScript is a good first language to learn, due to the supply of workers versus the demand for them. Fortunately, JavaScript is easy to learn and offers those who know it significant long-term job prospects, too.