What Kind of Company Does a 3D Modeler Work For? 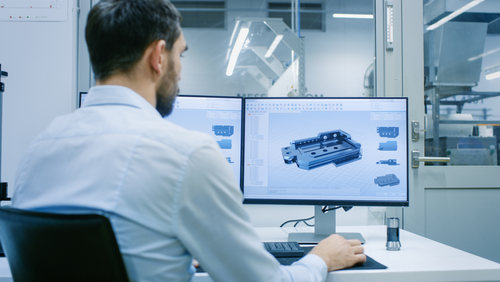 When prospective or recently graduated 3D modelers begin exploring the type of companies that they could work for, they often uncover information that they were unaware of. For instance, while most of them might know that the job will relate to some form of multimedia artistry, many do not realize that they could end up working for corporate marketing firms. According to the Bureau of Labor Statistics job duties of 3D modelers include everything from graphic illustrations to client meetings. This is why it is important to conduct in-depth research that will prepare one for the exact type of job that awaits them upon completing the educational requirements. So, what kind of company should a 3D modeler anticipate to offer him or her a job?

The most common characteristic of almost every company that works with 3D modelers is the fact that they are involved with advanced technology.

This does not necessarily mean that they are building spaceships. Instead, it provides a general approach that prioritizes uses of high-level software. Why would any prospective job candidate care about this? It is a pretty good indication that there will be on-the-job training regarding all of the company’s resources that the worker must become familiar with. Also, it gives them a basic idea of what to expect when it comes to the accessibility to systems that are needed to do specialized modeling.

Another common factor that will almost always be tied to organizations that use technology is innovation. 3D modelers can safely assume that their employers will be strong proponents of development and discovery.

This is an outstanding characteristic for artists who are looking to have a few individual projects that may be used to build new systems. Also, it is great because it usually means that everyone who works for the entity will have the same view on topics such as creativity. Being in a firm that allows the innovative spirits of its employees to fly freely is beneficial as it conveys a widespread message of independence. The modeler will be able to enjoy enough resources and minimum supervision when it comes to creating something new and unique.

As mentioned, the right dose of corporate innovation will facilitate another relevant skill that most modelers possess – creativity. In most cases, this means that there will be little to no micromanagement that can hinder one’s imagination and force them to obey a set of predetermined rules. Hence why most 3D modelers love their jobs! The fact that creativity is welcomed by the senior levels will allow new-hires to display their ideas without ever feeling inappropriate about having tangible feedback. Problems in this area often happen in regulation-ridden spheres, examples of which would be the accounting or law markets, where new workers have absolutely no say-so in any matter that concerns the entity’s overall operations. With multimedia artists, on the other hand, any 3D modeler that has a solid idea about improving the organizational performance would be encouraged to step forward and share it.

One of the most popular markets for 3D software is the area of entertainment. This includes everything from large movie studios in Hollywood to small companies that provide a wide variety of video services.

The most common types of projects here involve video game visuals, green-screen-based creations for movies or TV shows, and many different deliverables for areas of radio, music, dance, and fine arts. Thus, the types of engagements that one could work on are counted in thousands. This is also why a lot of 3D modelers pursue this sector upon their graduation. After all, there is probably no better way to get accustomed to the job and learn fast then to work for a company in the entertainment sector.

As mentioned, many modelers find jobs with companies that work in some level of the marketing industry. It is important to note, however, that these two can frequently overlap as both of them create projects that will be showcased online or on television. Someone who starts working in the entertainment area could easily switch to the marketing sector if they find it more appealing. The same is true of the vice-verse scenario. As far as the actual type of work performed, 3D modelers will usually be responsible for a similar set of duties as above. They will work with modeling of the company’s characters that will be showcased during video commercials or maybe even used as mascots.

Finally, another common characteristic that will describe the vast majority of employers of 3D modelers is online popularity. This affirms that almost all such companies will be dedicated to having a strong online presence that tends to be the primary source of client acquisition for them. This is because these businesses are open to implementing new technology, promoting innovation, and facilitating creativity. If the organization has absolutely no online representation, then all three of the said factors are undermined.

As time passes, 3D modeling is going to continuously integrate into more and more educational facilities. Those who decide to pursue this career choice and want to pinpoint the exact size, style, region and objective of an employer that is perfect for them should begin by analyzing their own goals and interest.

In the end, every 3D modeler will be different and their passions or technical talents will remain ever-changing to a point where there is no single company that works for everyone.