What is the Difference Between Film and Video? 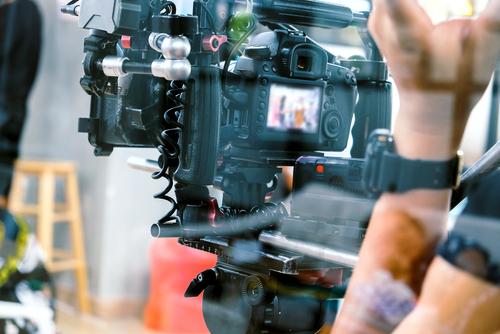 Since the invention of video in the 1920’s people have been comparing the medium to film and asking what is the difference between film and video. Of course, as video develops there are more aspects to consider, but the basic areas of comparison remain personal taste, truth in color, value range, and cost and ease of use. Today, many of Hollywood’s biggest movies are shot with video, but some directors still swear by film.

Film uses a light-sensitive chemical surface to record all the light that enters through the lens. Still photographs are taken at the rate of 24 per second. When played back, they represent themselves as motion. Anyone who has drawn several similar images on a pad of paper and then leafed through them rapidly recognizes the concept.

Video also records 24 images per second, but it uses CCDs or charged coupled devices. These CCDs record the light that enters the camera and translate the information into digital data. That data is then transferred to a computer which produces the images.

This may be an objective area, but film seems to have an edge over video when it comes to reproducing colors. Video cameras capture reds, greens and blues and uses them to approximate the spectrum of colors. Film captures the greens as a green-blue, the reds as a magenta and yellow, but also captures light strength in general. According to an inSync article, some of the colors are applied during the processing. That results in a certain degree of error and the finished product varies. In general, though, the colors are perceived as being warmer. The subjectivity of the process can be seen in the subtle difference in the colors in British and American movies. Video movies are sometimes shot through a pair of pantyhose to achieve the effect.

Any artist will testify to the necessity of using a value range chart in producing a painting. The chart is divided into sections that range from the darkest dark to the lightest light that will be used in the art. Artists compare the color shade and depth of hues they will use with the strength of the shades on the chart. To achieve a realistic painting, the whole range should be represented.

Video can produce a relatively small range of values. At a certain point, the camera just goes to black or white. Because film is capturing all the light, however, it can produce stronger values at a greater range. That results in deep shadows and brighter highlights. This is important because our eyes use the difference in values to separate and define images both in still and in motion photography.

Cameras that use film record light on a chemically reactive surface. That image does not vary whether the image is enlarged or made smaller. Video cameras record the light as “pixels,” and the number of pixels available is fixed, so increasing the size of the image will dramatically affect its resolution.

Film must be purchased. After exposure, it must be developed or processed. This is time-consuming and costly. In contrast, video cameras can be plugged into computers and edited immediately. Cutting frames from film is cutting it apart and splicing it back together. Trimming video is simply a computer process.

On the other hand, while videographers tout the ease of shooting a motion picture in video, multiple cameras are used that are all connected to networks of computers and wires. Shooting film may require different cameras for different angles, but they are not interconnected and don’t require digital technicians and multiple transfer stations, according to Moviemaker Magazine. Some comparisons seem to indicate that there isn’t a significant difference in the cost.

This is where the subjectivity comes in. Video is referred to as a cold medium because it results in a clinical interpretation of what it records. Some people like that effect, and view it as “truth in photography.” Others value the “mistakes” and differences that working with film produces. Steve Bellamy, the president of Kodak’s Motion Picture and Entertainment Division, feels that film has a warmth and “soul.” He says that people in the industry differ on the pros and cons of the two media, but all use one phrase that encapsulates the matter for him. “Everyone had one word that was common, and that was the word magic—the magic of film. And I’ve never heard that word associated with video.”

It is worth mentioning that newer, more capable film cameras are being developed for use by the movie industry. There are several pronounced areas of difference between film and video, but many of them come down to two things: what kind of production does the photographer want, and whether film or video will better achieve that result.

What Does a Compositing Artist Do?

What is the Median Salary of a Compositing Artist?

Can I Work in More Than One Medium as a Compositing Artist?

Is It Easy to Work for Myself as a Compositing Artist?

Are There Certain Parts of the Country Where It’s Easier to Find a Job as a Compositing Artist?

How Do You Become a Compositing Artist?

Is The Field For Compositing Artists a Growing Industry?

Should I Get a Master’s if I Want to Become a Compositing Artist?

What Degree is Best to Become a Compositing Artist?