Is the Field for Compositing Artists a Growing Industry? 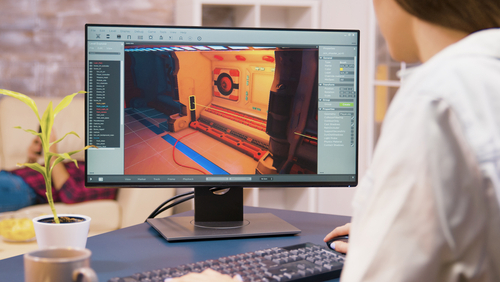 Before someone decides to become a compositing artist, they usually conduct in-depth research that helps them develop some basic expectations. Amongst the things that they commonly consider are average salaries, job opportunities, day-to-day responsibilities, and, most importantly, the industry outlook. Gaining an understanding of the direction in which the industry is headed is imperative for many different reasons. For instance, folks who know how the market is operating will be able to identify good starting ventures, successful employers, and even geographical areas where artists thrive the most. Before endeavoring into a discussion on the current situation, however, one must first understand an average composition artist’s scope of duties.

What Does a Compositing Artist Do?

Multimedia creators who specialize in composition generally focus on the final cuts of the project. Their job is to make edits and fix errors stemming from problems with presentation, animation, composure, lighting, and similar. While the field of animation is their primary market, many composition specialists also work in the film and video industry. Due to the high level of versatile responsibilities, these individuals must know the ins and outs of traditional animating and video editing, and they must perpetually improve their skills by learning how to utilize new technology.

How to Determine If an Industry Is Growing?

To figure out if an industry is growing, one must ask a few different questions that, when answered correctly, offer an outstanding insight. The most important ones are:

Even though the list could go on to include many additional inquiries, especially when it comes to smaller markets, these three examples will suffice for the vast majority of composition artists.

What is the current job outlook growth?

Investigating the job outlook growth helps determine how many new workers enter the composition field each year. For instance, if a hypothetical outlook comes in at two percent, which is relatively realistic, it means that there will be a two-percent rise in the number of jobs from the year before. In case that some city has 300 composition artists accompanied by a five-percent growth in the job outlook, it is fair to assume that there will be another 15 creators next year.

What is the median salary?

Unlike the aforementioned, the median salary tries to quantify the satisfaction and prosperity levels amongst the creators. By cross-referencing the industry-specific figures with the nation’s averages, one can deduce how much better or worse off compositing artists are.

Have any companies from the industry reached mainstream fame in recent years?

Questions about companies that recently reached mainstream fame, which is frequently overlooked, help in several ways. First, if there are extremely successful animation companies that recently became popular, one will be able to narrow down their options and only apply for jobs within such entities. The mainstream fame will also help determine how widespread the industry is. For an organization to reach the mainstream level of popularity, it must engage a ton of audience from all over the world. Well, the bigger the audience, the more likely it is that the market is booming. Finally, finding a successful animation company helps figure out what types of multimedia projects are currently in high demand.

Based on all of the aforementioned, the field for compositing artists is indeed a growing industry. According to the Bureau of Labor Statistics multimedia artists’ job outlook growth, which is currently sitting at four percent, is as high as the average. That means that the market for composition specialists is progressing approximately as fast as most other markets in the nation.

As far as mainstream projects go, multimedia artists have no shortage of ventures that qualify. Just consider the mind-boggling fact that the “Lion King,” which was released in 2019, and “Incredibles 2,” which was released in 2018, grossed $1.33 and $1.24 billion respectively. In just two years, animators and compositing artists who participated in these two projects accumulated over $2.5 billion in worldwide revenues. Thus, it is safe to say that there is a surplus of interest for this market, and the audience that is passionate about multimedia arts is counted in hundreds of millions of people.

To finalize the analysis, one must quickly glance over the upcoming months and years. After all, the said information will be futile if there is no way to ensure that the positive growth will continue. Fortunately, according to an analysis conducted by The Balance, which was based on a mix of key economic indicators such as unemployment, gross domestic product, and inflation, the United States economy appears to be healthy. Because economic downturns are probably the only thing that could endanger industries as powerful as animation and film, positive indicators are quite encouraging. They translate to a high likelihood of long-term growth within, and creators should consequently expect the upward-sloping expansion curves to continue soaring.

Regardless of the level of data accuracy that goes into an industry analysis, it is impossible to provide any guarantees. While the economy is doing extremely well right now, a minor change in politics, regulations, or domestic trends could put a halt to this. Not to mention the international developments that quickly find their way to the United States. Although the current outlook is highly promising, every compositing artist should check on their industry from time to time.

What Degree Do I Need to Become a Lighting Designer?