Are There Certain Parts of the Country Where it’s Easier to Find a Job as a Background Painter?

Deciding to become a background painter is an important moment in the life of every multimedia artist who chooses to pursue this career. After all, every subsequent venture will have to revolve around this decision. For example, choosing what school to attend is much easier when one knows that they would like to specialize in background painting. It is also much easier to decide which companies will be a good fit based on the types of projects that they offer. If they seldom rely on matte artists, which is what background painters are often called, one will have no reason to seek employment with them. 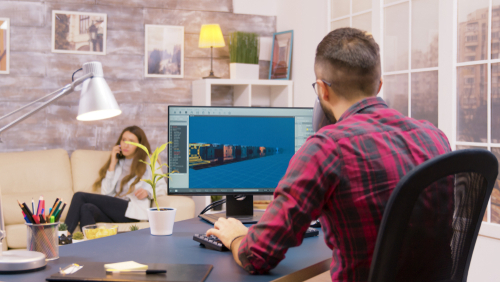 What a lot of people overlook, however, is the geographical location of their future job. This is because many recently graduated or inexperienced professionals remain unaware of the location-based differences in job availability and pay. So, after figuring out the specialty, it is time to determine what areas of the country will be the best markets for a career within that domain. A great example here would be jobs for petroleum engineers, per se. If these individuals decide to go work in Houston, which is known for the best oil and gas enterprise in the United States, they will earn a lot more and find work much faster than if they go to Maine. The same concept is true for animators who specialize in background painting. So, are there certain parts of the country where finding a job as a matte artist will be easier? Absolutely.

Job availability is a byproduct of the current relationship between the supply and demand curves within an industry. For example, if the animation business is booming somewhere, the supply of jobs will be outstanding. In case that there are many animating schools in that same area, it is safe to say that the demand will also be excellent. So, what is the final result? An evenly balanced demand and supply curves, which is known as equilibrium, that allow animators who reside here to find jobs fast.

Of course, the real world seldom works so well. The problem starts arising when there is a disconnect between the supply and demand curves. For instance, if there are a lot of background painting specialists and only one or two companies that will hire them, finding a job will be incredibly difficult. This is why people have to look into the presence of the multimedia industry whenever they are considering relocating somewhere.

According to the Bureau of Labor Statistics, the median salary for 17 million people who are employed in California is a little more than $59,000. This alone goes well above the U.S. median pay that is barely above $31,000. Furthermore, Animation Career Review reports that California is the most lucrative destination for multimedia artists who earn a whopping average of $82,170 per year here. And while the dollar figures are certainly impressive, California will be a great choice for background painters for one more reason. Finding a job is much easier than practically anywhere else.

When discussing The Golden State, mentioning Hollywood and all of the entertainment industries that live here is inevitable. For instance, the following is the list of some of the most popular organizations that are headquartered across Cali:

Do any of these sound familiar? If they do not, you can rest assured that every animator who specialized in background painting will be familiar with each of those companies. After all, these are some of the world’s largest video game, film, cartoon, and animation businesses on the planet. Well, it is fair to expect that such a high presence of employers in the local area will make it relatively easy to land a job. Not to mention that it will be a rather high-paying job.

After showcasing a competitor from the West Coast, it is time to travel approximately 3,000 miles to the east. Doing so will bring one to the state known as The Empire State, The Big Apple, and The Concrete Jungle. In other words, it will bring the animator to New York.

The earning situation in New York is fairly similar to California. Costs of living are much higher than they are in most other parts of the nation and median salaries reflect this well. More importantly, however, Animation Career Review ranks New York as one of the top-five destinations for background painters who are looking to earn a substantial amount of money.

Furthermore, finding a job here will be just a matter of time. Some of the major companies that will hire matte artists for background painting projects include:

These brands bring a great mix of movie production, video game, and animation businesses that work with a plethora of multimedia artists. And while New York’s 4.3-percent unemployment rate is just slightly above the national average, as per the New York State’s Labor Date, background artists should not have to worry about being out of work for too long.

Since California and New York are on the very opposite ends of a spectrum, most artists should be able to choose between the two easily. If one wants more options, however, they should look into Massachusetts, Texas, and Washington. Also, analyzing any state in the Midwestern United States, which includes Iowa, Illinois, Missouri, and roughly half-dozen others, would be a great starting point.

It is vital to remember that the job markets are subject to constant change. Whilst California and New York are indisputable leaders when it comes to job outlook for matte artists right now, economic changes could disrupt their status. Nonetheless, every background painter who would like to land a high-paying job fast should undoubtedly do some research that starts with either of the said states.