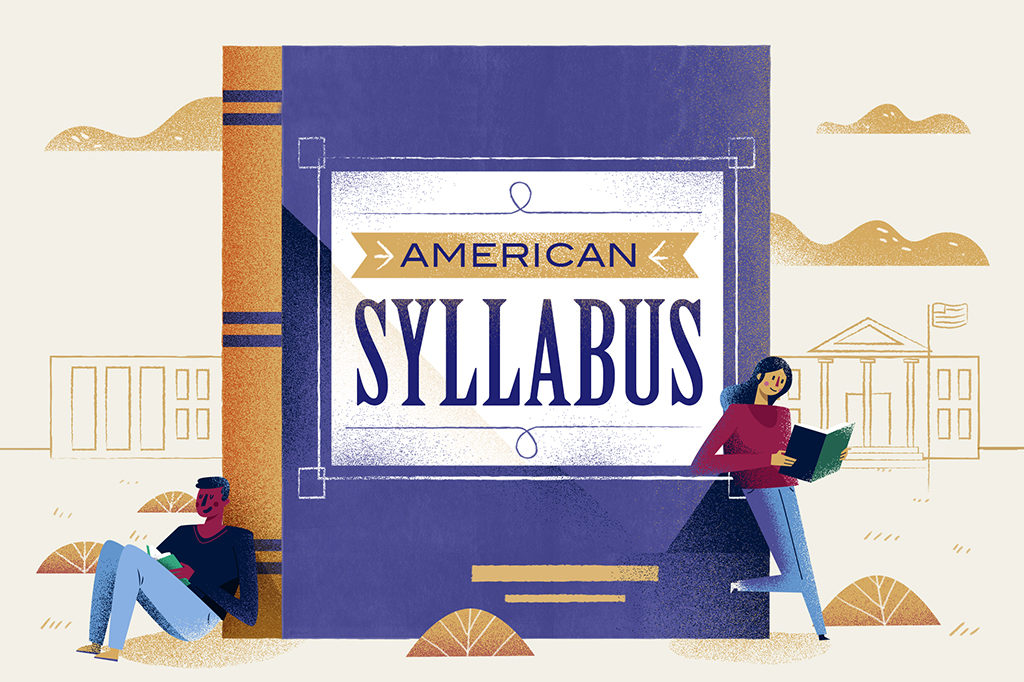 So wrote John Cage, composer, teacher, and lifelong student. And he had a point. If everybody in your class reads the same book, what hope is there of a chance encounter between two random texts?

Thanks to the Open Syllabus Project, you can now access the reading lists of more than 2,500 colleges around the country. Whatever subject you’re studying, it is now easy to diversify your reading without straying from reputable sources. Or, if you can’t enroll in college right now, create your own reading list for a bit of home-schooling.

Degree Query was curious what the landscape of American college books looks like. What are the texts that are informing tomorrow’s society? We used Open Syllabus to identify the most commonly assigned college books in every state, overall, and in five core subjects: Political Science, Business, Computer Science, Economics, and (of course) English Literature.

We also compared Ivy League reading lists to those of America’s top public schools. And finally, we analyzed the gender diversity of the books in our study. Don’t forget to shop indie!

The Most Commonly Assigned Books in US Colleges, Mapped

Everybody gotta write in college, so it’s no surprise that many of the most-assigned books in the US are writer’s handbooks. Diana Hacker’s A Writer’s Reference and A Pocket Style Manual appear frequently across the map; the former is assigned across 1,734 courses in Alabama alone.

Click on the image to see the map in full size

The book with the biggest punch, though, is The American Promise: A History of the United States. It appears on 3,273 syllabi in Texas, making it the book with the most assignations in any one state. The book is particularly beloved of political and social history students, for whom the generous helping of illustrations and first-person testimony brings the story of America to life.

What are the Most-Popular College Books in 5 Different Fields of Study?

Next, we broke down our study by subject. Click the arrow to scroll between maps of the most-assigned books in Political Science, Business, Computer Science, Economics, and English Lit.

You might expect political science texts to be divided along political lines, but tomes such as The Clash of Civilizations and the Remaking of World Order are popular in both red and blue states. Indeed, one criticism of the book (levied by the likes of Chomsky and Said) is that the book’s argument is weighted towards the maintenance of an American hegemonic monoculture.

Frankenstein roams from east coast to west on literature syllabi. In fact, Mary Shelley’s seminal science-fiction horror is the most-assigned book in our whole study, appearing on upwards of 5,000 courses. And Oedipus Rex may be the oldest book to be widely studied in the States: Sophocles wrote the play nearly two-and-a-half millennia ago.

What Ivy League Students Are Reading That You Aren’t

There is a distinctly literary edge to public school book recommendations next to the social, political, and economic books that top the Ivy League chart. But both groups are clearly fixed on studying human nature. Thomas Hobbes’ legendary societal critique is number one for Ivy League schools, and Joseph Conrad’s take on the imperialist mindset is the most-assigned unique title for top public schools.

Click on the image to see the chart in full size

Perhaps more notable are the books that overlap. Marx’s manifesto and Hardin’s Tragedy of the Commons go to battle over the socio-economic responsibilities of the state and of the individual. As time goes by, these classic texts take on fresh meaning in new contexts without ever offering easy answers. But thanks to the appearance of Strunk’s classic writing manual on both lists, at least the essays will be readable.

Here are the top-assigned books across different subjects. Click the arrow to scroll from discipline to discipline.

There is notably zero overlap between the books most recommended in English lit, business, and computer science. Each bunch of schools has its preferred writing guide: Strunk for public schools and the more academically oriented They Say / I Say for Ivy Leaguers. The public school list also features a book about writing, rather than writing about, fiction.

Curiously, there are some exact matches in the priorities of the schools’ economics and political sciences. The two groups both favor Leviathan and The Clash of Civilizations as essential PS texts, while Adam Smith is a mainstay on economics courses.

Our final graphic shows the gender breakdown of the 100 most-popular books in American colleges. It is a stark visual. Only 20 of the books have a sole female author, two are mixed, and the remaining 78 are written by men.

Click on the image to see the chart in full size

Of those 22 with female authors, around a quarter apply to the stereotypically female occupation of nursing. And several are more or less explicitly concerned with feminism, from Wollstonecraft’s proto-feminist Vindication to Harriet Jacobs autobiography of slave life to Gilman’s ‘feminist gothic’ short story, The Yellow Wallpaper.

Sure, students have plenty of reading to keep them going through the dark months. But nothing expands the mind like an unexpected passage in a privately discovered book. Whether you’re a student looking to boost your official reading list or an autodidact looking for direction, there’s plenty of food for thought in this challenging collection of frequently assigned college books.

To determine the most-popular books at Ivy League schools and public schools, we aggregated the ranks of the top 100 books at each Ivy League school and the top 8 schools on the list of the 2021 Top Public Schools of the U.S. News & World Report.

For the full research behind this study, visit bit.ly/AmericanSyllabus.