How Strong Do My Math Skills Need to Be So I Can Be Successful at Computer Science?

Computer science, which is one of the highest-paying master’s degrees, has a lot to do with math. Many of the foundations of the field of computer science relate to math, which is why students often fear that they can’t work in this field if they don’t have strong math skills. Generally, you don’t need to excel at math to succeed in a computer science degree program, but your skills and performance in the subject should be average, if not better. If you’re considering a master’s in computer science degree, you should understand how you would use math in your future career and what undergraduate coursework in math you need prior to graduate school.

How Computer Science Professionals Use Math

It’s not so much that you will be asked to perform complicated calculus but rather that you need to use the principles of applied mathematics in programming software applications. Having a strong mathematical problem-solving framework is essential for not only identifying the different possible solutions to a dilemma but also determining which option is the best, most efficient choice.

The programming aspect of computer science is one of the bigger challenges students face in learning this subject. Success working in programming often requires strong skills in logical and methodical thinking. It’s no coincidence that students who are strong in math tend to also have strong skills in logical reasoning. Logical thinking is a part of key mathematical thinking processes like problem-solving and reasoning. In fact, learning how to think with the use of mathematical logic is arguably even more important than memorizing the mathematical rules and equations used to calculate the right answers to problems on a test or a homework assignment.

While computer science students often expect to naturally pick up the ability code, that’s not the case for many students. It can take several programming courses spread over the span of a few semesters to truly begin to feel confident in your ability to code. In a few ways, including the reliance on logical thinking and the constructive nature of these subjects in which more advanced knowledge must build upon earlier foundations, programming skills are similar to math skills.

Computer science is a broad area of study, and some aspects, like Web development, require relatively little actual math work compared to more math-heavy areas of the field, like image processing and artificial intelligence. 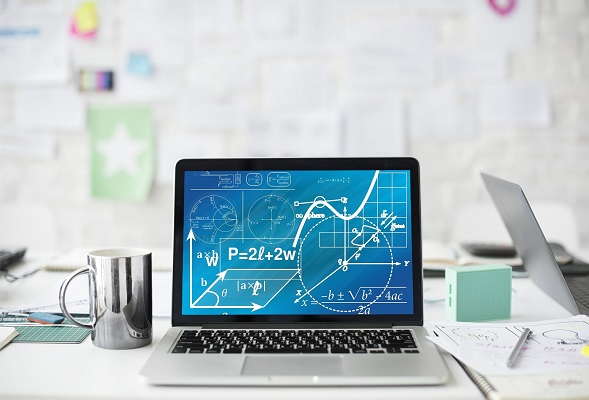 Mathematics is so important for success in computer science that many master’s degree programs in this field include some math courses in their prerequisites. Before students enroll in a graduate program in computer science, they may need to have completed prior coursework in linear algebra, probability and statistics, as well as a couple semesters of college-level calculus.

Rather than mandating specific courses, some master’s in computer science programs require knowledge of certain mathematical topics. For example, you should develop skills in logic and mathematical reasoning, as well as learning how to solve recurrences, use graphs and calculate probability.

If your math background is limited, the prerequisites of the computer science master’s degree program you choose are particularly important. The math prerequisites for some programs can be completed by taking a Discrete Mathematics for Computer Science class.

You might also need strong math schools to earn an impressive score on your graduate admissions tests. Taking the Graduate Record Examinations (GRE) General test is part of getting into many graduate programs in computer science. Computer science admissions personnel may be particularly interested in the GRE scores you attain in the Quantitative Reasoning portion of the test. The exam content in this section tests your ability to analyze and interpret numerical data, apply mathematical models to solve problems and utilize skills in branches of math such as algebra, arithmetic and geometry.

A less than impressive GRE score, particularly on the Quantitative Reasoning section of the exam, may limit your ability to get into the master’s degree program of your choice.

Is Computer Science More Difficult Than Other Fields?