Which Is Better to Take as Part of My MBA Application: The GRE or the GMAT?

You may already know that the Master of Business Administration (MBA), one of the top degrees for the highest-paying business careers, can open up a lot of career opportunities. However, many prospective MBA students have questions about the typical admissions requirements for a graduate education in business. What may be particularly puzzling is which of the graduate-level standardized tests, the GRE or the GMAT, is a better choice for students planning to pursue an MBA. Although the GMAT has historically been the graduate test of choice for business schools, many MBA programs today will also accept applicants who have taken the GRE instead of the GMAT. Taking these graduate exams is no simple feat, often requiring more than 100 hours of study – so before you choose which exam to take, you should weigh your options carefully.

GMAT stands for Graduate Management Admissions Test, which is administered by the Graduate Management Admission Council. This test was developed for management programs, so it makes sense that the exam is closely linked with acceptance into MBA programs. In fact, the GMAT has been the test most widely used by MBA programs for more than 60 years, dating back to 1953, and it remains the most prevalent test for MBA students today.

The GMAT is a four-section exam. Over the course of three and a half hours, test-takers answer questions designed to test their quantitative reasoning, verbal reasoning, integrated reasoning, as well as completed in analytical writing assessment. Although exam takers spend more than an hour on qualitative reasoning, the GMAT is widely considered to be a test that focuses on quantitative subject matter. The exam content includes questions that test both your problem-solving abilities and your capabilities in data sufficiency, which entails analyzing a problem to identify relevant and irrelevant data and figuring out if you have enough data to draw from to answer the question posed in the exam.

Scores on the GMAT can range from a low of 200 to a high of 800. Some business schools may have a minimum GMAT score requirement, but many schools look at the GMAT as just one of several factors considered as part of a prospective student’s application. At some of the top MBA programs in America, most accepted applicants have scores in the range between the mid-600s and the high-700s.

The GMAT prepares you for acceptance into most MBA programs, but degree programs in other fields may not accept it. If you’re debating between an MBA or a Master of Science in a subject like engineering or IT, a GRE may help you keep your options open.

GRE stands for Graduate Record Examination. Unlike the GMAT, which focuses specifically on test-takers’ readiness for graduate programs in business and management, the GRE General Test is more versatile enough to be used to qualify applicants for admissions to graduate school in a variety of academic disciplines. The three sections of exam content found on the GRE General Test sound a lot like what you encounter on the GMAT: verbal reasoning, quantitative reasoning and analytical writing. However, the GRE questions typically emphasize complex verbal reasoning more strongly than the GMAT does. The content of this section includes questions that test your ability to draw conclusions from text, look at literal and figurative meanings of language, differentiate between an author’s major and minor points and otherwise show a deeper understanding of what you have read than the basic reading comprehension and sentence correction covered in the GMAT. For the quantitative reasoning portion of the GRE, test-takers are asked to analyze quantitative data, use mathematical models to solve problems and know the basics of arithmetic, geometry and algebra.

While the GMAT’s claim to fame is that it is the most widely used test for graduate business school admissions, the GRE is the most widely used exam for admissions to all graduate programs. Not as many MBA programs accept the GRE as do the GMAT, which may limit your options a little if you take the GRE. However, GRE scores are accepted at thousands of graduate-level business school programs worldwide, so you should certainly still be able to get into a good business school if you have a strong GRE score.

Choosing Between the GMAT and the GRE 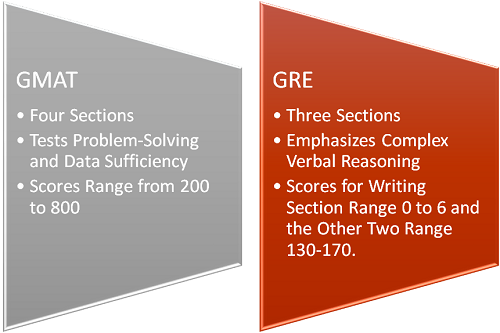 When the GRE was less commonly accepted by business schools, whether to take the GMAT or the GRE was a no-brainer. Now that many schools are willing to accept either exam – and some programs even prefer the nontraditional GRE – you have a decision to make. Neither test is necessarily a better choice overall, but these different exams may be a better fit for different individuals.

You generally can’t go wrong by taking the GMAT, since you are unlikely to find a business school that will require the GRE specifically and refuse to accept the GMAT. However, there are some potential benefits of choosing the GRE over the GMAT. If you don’t have your heart set on a specific school, it may make sense to focus on your own strengths rather than choosing the GMAT purely because it is more widely accepted. Prospective students who want to show off their creativity, verbal reasoning and other qualitative skills – such as those interested in a specialization in marketing, for example – can better highlight these attributes by taking the GRE. If your primary skills are more quantitative in nature and you’re interested in a field like finance, where the graduate coursework and the nature of the work are heavily focused on numbers, the GMAT more closely fits your aptitudes.

The GRE is quite a bit older than the GMAT, dating back to 1936. Although the GMAT is still more popular among business students, with 200,000 test-takers each year, many more students take the GRE – upwards of 570,000 per year in total, across all disciplines.

What Should You Know About Getting Into an MBA Program?

Is There Any Math Required for an MBA?

At What Point or Age Is It Best to Pursue an MBA?