What Does an Auditor Do? 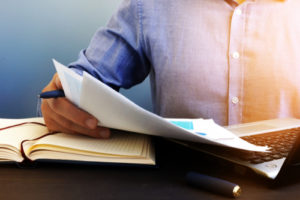 How many times have you heard someone say about their job, “No one understands what I do?” Or have you ever heard someone say about their job, “I have no idea what I’m doing!” That can be a scary thought. Imagine a doctor, lawyer, or mental health worker saying that. Thankfully, positions like a Certified Internal Auditor (CIA) can escape this mystery. With a clearly defined job description and a clearly defined function, an auditor can avoid all that confusion.

Primary Function of an Auditor

Knowing the primary function of an auditor helps us understand all the other auditor’s duties and responsibilities that revolve around it. To put it simply, an auditor protects a company’s assets by ensuring they comply with all internal procedures and legal regulations. A company gains revenue through providing goods and services. An auditor ensures that the revenue gained matches the goods and services provided. If you work as an auditor for a non-profit, then one way the company gains revenue is by billing a client for service provided (such as a counseling appointment). An auditor would make sure that the billings were legitimate, the services were provided, and the paperwork reflects this.

With all that in mind, you can think of an auditor as having a fundamentally protective role in the company. The auditor protects the company and its assets because if the revenue, services, and paperwork don’t match up, the company (or someone in it) may be guilty of fraud. And this is where we see the primary difference between an accountant and an auditor. Although the role may be rolled into one, an accountant often needs to make projections about future revenue streams and potentialities. However, an auditor protects against fraud and other discrepancies. You can find out more about the differences between an accountant and an auditor here.

What does the primary function of an auditor look like in action? How do they accomplish this function? We find the answer to this in an auditor’s duties and responsibilities. These can include:

By fulfilling these auditor duties and responsibilities, the auditor can protect the company against fraud, as well as protect consumers from becoming victims of fraud.

Role of an Auditor in a Company

What is the role of an auditor in a company? The primary function of an auditor is to prevent fraud, all the auditor’s duties and responsibilities serve that end, but how does this work in a for-profit company? In other words, how do they contribute to the culture of a business?