Which Degree is more Beneficial: Cybersecurity or Criminal Justice?

What is a definition of Beneficial?

The Merriam-Webster dictionary defines the word as:

Producing good results or helpful effects: conferring benefits; receiving or entitling one to receive advantage, use, or benefit.

The same dictionary defines benefit as something that produces good or helpful results or effects or that promotes well-being.

The word originates from the Latin beneficius meaning favor or promotion.

How does this relate to the two degrees?

Proceeding with these definitions, the more beneficial degree is the one that affords a measure of advantage or a better effect. The more advantageous degree, then, could be the one with higher salary potential, less unemployment, more job opportunities, more chance of promotions, or other personal benefits. The latter can only be assessed by the one contemplation the two degree choices.

Is one degree better than the other for jobs? Crime will always be a booming business. Cyber security makes the news when a major corporation has been hacked. Security breaches have become more prevalent. In 2016, hackers stole data from 57 million Uber customers. In March 2018, the Department of Justice indicted nine Iranian hackers over an alleged spree of attacks on more than 300 universities in the United States and abroad. Hackers breached Under Armour’s MyFitnessPal app in late February, compromising usernames, email addresses, and passwords from the app’s roughly 150 million users. Other notables include retail businesses like Macy’s and Target. The healthcare sector was a lucrative target for hackers in 2017. This trend continues in 2018 with the increased creativity displayed by this criminal element.

According to Cyber Defense Magazine in January 2018, there are approximately half a million cybersecurity-related job openings in the United States currently. The projected demand equates to an additional 1.8 million additional cybersecurity professionals to fill the workforce gap by 2022. IT security jobs offer salaries three times the national average. More importantly, unemployment is almost none existent in this sector.

There are numerous jobs available to the criminal justice graduate. For those seeking a field position, this degree may be suitable. You can become a border patrol or police officer, state trooper, or detective. Some of the field positions require only an associate degree. Jobs in federal agencies, such as the FBI, DEA, U.S. Marshal, ATF (Alcohol, Tobacco, Firearms & Explosives), or Postal Inspector will require at least a bachelor’s degree. The preferred degree varies according to the type of work at these agencies.

Which degree is more beneficial for your bank account? The U.S. Bureau of Labor Statistics (BLS) reported the median pay for police and detectives at $62,960 as of May 2017. Of course, many factors influence this number, particularly geography. A higher cost of living means a higher salary, generally. The projected job growth per the BLS is 7%, which is only average.

Despite the attractive salary and benefits for police officers, numerous police departments around the country have experienced declining numbers of officers and recruits. The public perception of the police has contributed to the negativity associated with the profession.

Compare the aforementioned BLS salary to that of an Information Security Analyst. This is the closest occupation reported by the BLS to cybersecurity. The 2017 median may for the security analyst was $95,510 with a Bachelor’s degree. The projected job growth is 28%.

In 2016, Forbes did a study of cyber security salaries in U.S. metro areas and found—not surprisingly—that they are well worth the time, money, and education. For professionals already in the IT sector and who hold a bachelor’s degree, moving over to cyber security may be as basic as earning an industry certification. The Information Systems Security Association (ISSA), has created a Cyber Security Career Lifecycle, which cycles through the stages of security careers, for those considering the profession.

On paper, the benefits appear to favor cyber security. You would be working in an IT-related profession that offers many opportunities for progression. The various certificates and certifications assure your rise in stature within a corporation. However, your criminal justice degree does not limit you to police work. You have the benefit of several fields. There is forensics, crime analysis, intelligence analysis, and other behind-the-scenes positions. You could apply your criminal justice degree in the pursuit of a career in crime scene investigation, crime victims coordinator, criminal justice policy adviser, criminal law paralegal, corrections office, and more.

Here is a synopsis of the highlighted benefits of each degree: 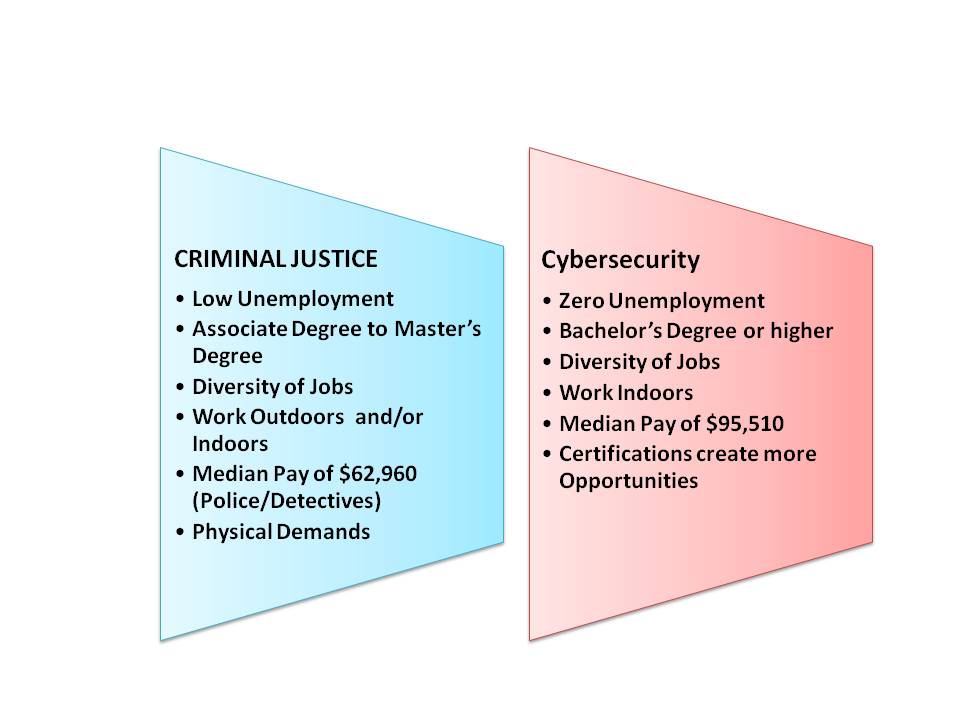 What are the Benefits of pursuing a Degree in Law Enforcement?

What Government Jobs are there with a Criminal Justice Degree?

How can I boost my Education after earning a Criminal Justice Degree?

How fast can I earn a degree in Criminal Justice?

What is a Bachelor’s Degree in Criminal Justice?

What are my Master’s Degree Choices for a Career in Cybersecurity?

Why should Women consider a Degree in Cybersecurity?

What are the Fastest Schools to earn a Master’s Degree in Cybersecurity?

What are the best Certifications to add to my Degree in CyberSecurity?