What are the Degree Choices to work in the Intelligence Community?

What is the Intelligence Community?

The Washington Post reported in 2010 that there were 1,271 government organizations and 1,931 private companies in 10,000 locations in the United States that were working on counterterrorism, homeland security, and intelligence and that the intelligence community as a whole includes 854,000 people holding top-secret clearances. According to a 2008 study by the Office of the Director of National Intelligence, private contractors comprise 29% of the workforce in the U.S. intelligence community and account for 49% of their personnel budgets.

You will need a college degree to work in IC. An agent for the New Orleans Federal Bureau of Investigation stated, “Two undergraduate degrees that are common for FBI Agents are political science and criminal justice”. Graduate degrees are also encouraged. To enhance your competitiveness in this field, a law degree is desirable. For individuals wishing to pursue national security/intelligence career paths within the FBI, degrees in international affairs and foreign language are desirable.

A synopsis of degree choices:

International Affairs– Also referred to as International Relations. Many colleges incorporate into their curriculum: political science, geography, economics, and history. Some programs also include classes in anthropology, international law, and religious studies. There is often a world language requirement as well.

Foreign Language– This can be one of the qualifiers to apply for jobs in federal agencies, particularly the CIA. Their career page states that because of the shift in intelligence priorities, foreign languages can increase in importance rapidly. The agency requires employees with language skills to handle both current national security requirements and potential new missions.

Additionally, the intelligence community makes regular use of translators and interpreters. Looking to the future, the IC advocates its mission statement to increase the number of intelligence officers who speak a foreign language. According to the Director of National Intelligence website, multiple scholarships and incentives are in place to encourage and reward students to learn a foreign language.

Computer Science– This is another degree the IC emphasizes. Software Engineers work in the Cyber arena and specialize in the design, development, integration, and deployment of cutting-edge tools. They work on techniques and systems to support cyber operations and other intelligence activities. In this line of work, a minimum requirement is a Bachelor’s degree in Computer Science, Software Engineering, or Computer Engineering.

Computer/Electrical Engineering– The National Security Agency (NSA) looks for entry-level engineers with technical skills in design/analysis of LANs/WANs, routers, switches, and firewalls. There are several functions with these qualifications. You might work in database management systems, internal infrastructure, network technology, software development, and many others.

Political Science– This is another degree acceptable in the IC. Again, agencies such as the CIA list this as a requirement to work in the field of political analysis. Political analysts support U.S. policymakers by producing written assessments of the domestic politics and international relations of foreign governments and entities. They examine these actors’ goals and motivations, culture, values, society, and ideologies.

Private companies in the security business hire graduates with political science degrees. For example, a company (Pinkerton) that is a global leader in the business to identify, mitigate, and manage business risks and security concerns, anywhere in the world. They posted a job in 2018 for a Regional Intelligence Specialist. One of the preferred degrees is in political science.

Law– Legal professionals are in demand in intelligence agencies. For example, candidates work with FBI employees at all levels, advising on a broad spectrum of legal and legislative challenges affecting international and domestic law enforcement. This includes intelligence operations, investigations, and policies.

The DEA also lists a law degree (J.D.) as one that qualifies you to apply for work in their Intelligence Program. Intelligence Research Specialists conduct and manage complex research projects in areas such as drug cultivation and production, methods of transportation, trafficking routes, and the structure and analysis of trafficker organizations. 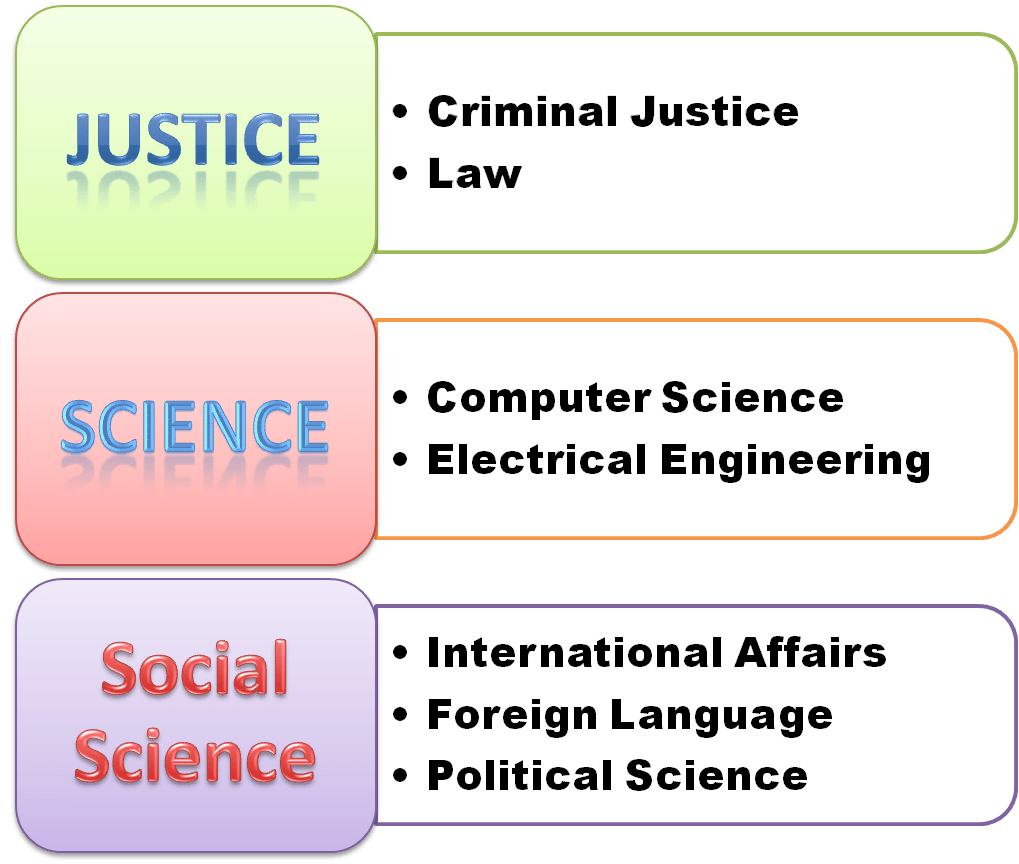 Positions in the federal government are classified in three ways: Non-Sensitive Positions, Public Trust Positions, and National Security Positions. Each of these positions requires some level of a background investigation. The elements that make up a background investigation vary depending on the level of clearance deemed necessary for a position. There are four main types of security clearances for national security positions. These are confidential, secret, top secret (TS), and sensitive compartmented information (SCI). Only federal agencies can grant security clearances.

Investigations are thorough, and you need to assume that they will find out everything about you. This includes juvenile records-even those that are sealed or purged. Some past transgression won’t necessarily disqualify you; lying about it will. Especially during a polygraph. If you conceal information on your security form or during your subject interview, an adjudicator may determine that you are unreliable and dishonest. If the job you want requires a level of security clearance, your past behavior could ruin your chance.